How The Thermistor Suppresses Inrush Current

As we all know, the main characteristics of the thermistor are high temperature flexibility, low thermal inertia, small size, easy layout, and can be made into various state layouts. Therefore, with the development of industrial and agricultural production and scientific skills, such components have been widely used. This article will talk about how the thermistor suppresses the surge current and how it measures the temperature.

Switching power supplies, motors, transformers, and lighting power supplies have a large inrush current at the moment of switching on. This inrush current may damage components (such as MOS tubes) or burn the fuse. Connecting the NTC thermistor in series with the load can effectively suppress this current. Before the power is turned on, the thermistor has a large cold resistance, which can suppress the current. 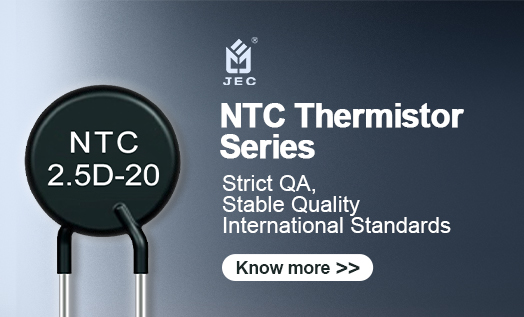 Under a large enough current load, the resistance value drops to 1/(10~50) of the original due to self-heating, and the power consumed by it drops accordingly. Products using NTC thermistors cannot be switched on and off frequently. When the product is turned off, the NTC thermistor must be restored from a high-temperature low-resistance state to a normal-temperature high-resistance state in order to achieve the same surge suppression purpose as the previous one.

Previous: The Role And Precautions Of Use of Film Capacitors