About CB and CBB Film Capacitors

Film capacitors are electronic components developed on the basis of the paper dielectric capacitor technology invented in the 1930s in the second half of the 19th century. Film capacitors use plastic films as dielectrics, so they are called film capacitors.

Polystyrene film capacitors (polystyrene-film-capacitors type: PSR, PSA) are made of electronic grade polystyrene film as the medium and high-conductivity aluminum foil as the electrode to be wound into a cylindrical shape, and made by heat shrink sealing. The capacitance is between 100pF~0.01uF, and the rated voltage between: 100V--30KV.

④ The temperature coefficient is small.

⑤ It can be made into precision capacitors, and the allowable deviation can reach ± 0.1%.

⑦ The production process is simple and the cost is low. 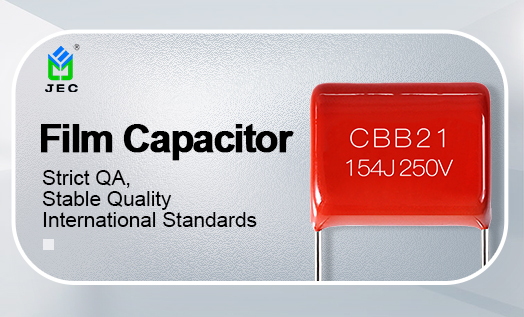 Polypropylene film capacitor uses a metal foil as an electrode, and after overlapping it with a polypropylene film from both ends, it is wound into a cylindrical capacitor. The capacitance is between 1000pF--10uF, and the rated voltage is 63V--2000V.

It is used in five common occasions such as filter circuit, motor startup, interference reduction, resistance-capacitance step-down, and the function of signal circuit.

If you're not sure about the selection, you can always turn to a professional manufacturer for help. Dongguan Zhixu Electronic Co., Ltd. (also JYH HSU(JEC)) has engaged in the electronic component industry for many years, and our technical engineers can help you solve related problems. Don’t hesitate to contact us if you have questions or need samples.

Next: Understand the Varistor in One Minute