Will Battery Be Replaced by Super Capacitor

The development of science and technology has also promoted the development of capacitors. Take super capacitors for example, they are increasingly used in notebook computers, cameras, smart phones or electric vehicles. Supercapacitors are different from traditional batteries in that they store large amount of energy quickly and release them quickly. For example, when a train enters a station to brake, the supercapacitor can store the energy generated by braking and provide it to the train when the train needs a lot of energy to start. Will batteries be replaced by super capacitors in the future?

Supercapacitors are moving in the direction of replacing batteries. Compared with lithium-ion and other battery technologies, supercapacitors have advantages in the aspects such as safety, fast charging and size, and at the same time contribute to complex battery management systems for various applications such as automobiles, power grids, and IT.

However, the battery will not be replaced by a super capacitor. Both of them have advantages. For the selection, we must choose the appropriate super capacitor or battery according to the actual situation of the circuit. In some cases that require high-power discharge and higher output energy, you can use supercapacitors and batteries in combination to give full play to the advantages of both. 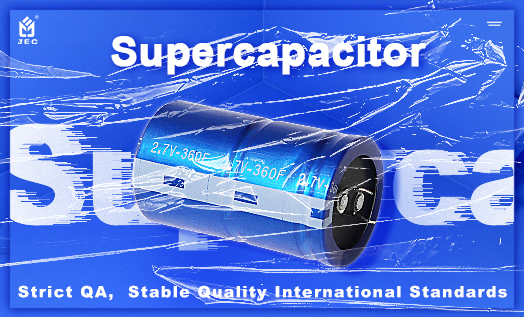 Supercapacitors and batteries are energy storage components, the difference is:

②The working temperature of the super capacitor is wider than that of the battery, -40 to 65 Celsius degrees;

Whether it is a super capacitor or a battery, we must understand its advantages before using it, which can help us to better use it. Hopefully the content of this article will be helpful to everyone. Dongguan Zhixu Electronic Co., Ltd. (also JYH HSU(JEC)) has a full range of varistor and capacitor models with guaranteed quality. JEC has passed ISO9001:2015 quality management system certification; JEC safety capacitors (X capacitors and Y capacitors) and varistors have passed national certifications of the main industrial powers across the world; JEC ceramic capacitors, film capacitors and super capacitors are in compliance with environmental protection indicators. We have over 30 years of manufacturing experience. If you have technical questions or need samples, please contact us.

Next: Are Super Capacitors Superior Over Lithium Batteries