NTC thermistor is a temperature-dependent resistor using special semiconductor ceramics with a negative temperature coefficient (NTC). They have a high electrical resistance at room temperature. When they are energized, they generate heat by themselves. As the temperature rises, the electrical resistance decreases. Because of this feature, they are used as current protection devices for electrical and electronic equipment, conveniently and effectively limiting abnormal currents, including magnetizing inrush currents when energized. NTC thermistors used as current protection devices are also called power supply thermistors. 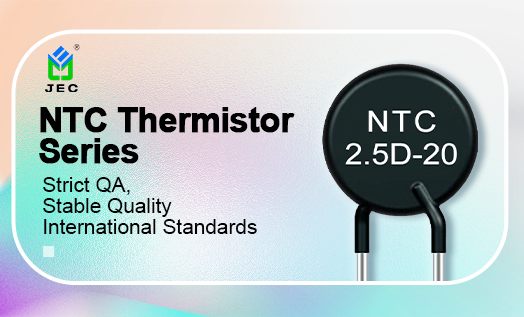 Switched-mode power supplies (SMPS) are small, light, and of good performance - they are often used as power supplies for electronic devices. When the SMPS are energized, the high-peak magnetizing inrush current charges the smoothing capacitor, thereby charging the device. Since this inrush current will have a harmful effect on the life of the capacitor, damaging the contacts of the power switch or destroy the rectifier diode, corresponding countermeasures must be taken.

For this reason, we found through experiments that by inserting an NTC thermistor to form a low-cost simple circuit, the inrush current in the power supply can be limited. Even if the NTC thermistor is connected after the rectifier circuit, the same result can be obtained.

The above content is the application of NTC thermistor in limiting the inrush current. Hopefully the article is helpful. Dongguan Zhixu Electronic Co., Ltd. (also JYH HSU(JEC)) has a full range of varistor and capacitor models with guaranteed quality. JEC has passed ISO9001:2015 quality management system certification; JEC safety capacitors (X capacitors and Y capacitors) and varistors have passed national certifications of the main industrial powers across the world; JEC ceramic capacitors, film capacitors and super capacitors are in compliance with environmental protection indicators. Welcome to contact us for free samples and any questions.

Previous: What is MPX Capacitor

Next: Things You Should Know about Ceramic Capacitors