The Role Of Varistor In The Circuit

A varistor is an electronic component whose resistance changes with the applied voltage. It is also called voltage-dependent resistor (VDR), which has a non-linear, non-ohmic current-voltage characteristic similar to a diode. However, compared with a diode, it has the same characteristics in both directions of current.

a. Absorb the sparks generated by carbon brushes and commutator rectification

c. Extend the life of the motor

The application of the varistor in the micromotor is mainly to absorb the back electromotive force when the motor commutates. To prevent the commutator pole from being short-circuited in the commutator to produce sparks, the commutator and brush surfaces are burned by high temperature, which affects the service life of the motor, and generates electromagnetic waves, which interfere with the use of other electronic products.

Varistors have many advantages and can be used in many different types of applications to suppress mains transients from household appliances and lighting to industrial equipment on AC or DC power lines. Varistors can be directly connected to power supplies and semiconductor switches. 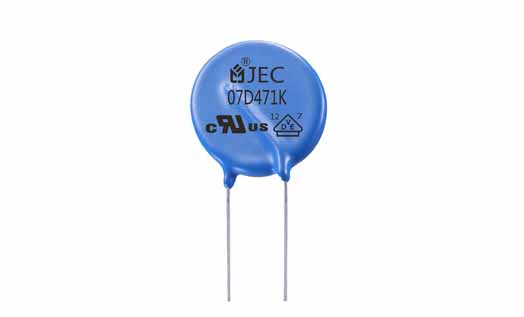 The Role of Varistor in the Circuit

The voltage protection function of the varistor in the circuit can generally be combined with a fuse or other overvoltage protection. Usually used for lightning protection; when an overvoltage occurs, the varistor will be decomposed and display a short-circuit state, thereby clamping the voltage at both ends of it at a lower level, and the resulting over-current short-circuit will burn the fuse or force the air switch tripped, thereby forcibly cutting off the power supply.

Generally speaking, it has little effect on other components after damage. Only check the circuit components connected to it. If it is damaged by a fault, it will blow the fuse. The varistor plays the role of "operating overvoltage" protection in the circuit.

The varistor is resistant to lightning strikes; when the varistor is short-circuited by a large current, the fuse is immediately burned to protect the circuit.

3. The Need for Safety Testing

A safety test of the varistor is required. With the development of science and technology and the improvement of people's living standards, a large number of electronic products have entered our lives, including our commonly used household appliances, so there are higher requirements for the safety performance of household appliances. Varistor as an electronic component is also listed as a safety certification requirement.

In order to protect the safety of consumers and safeguard the interests of consumers, the state has successively formulated a series of laws to regulate these conditions in the market and correct defective products. If electronic products cannot be sold on the market without security monitoring, this is based on customer safety and must be implemented.

We are varistor suppliers. Please feel free to contact us if you are interested in our products.

Next: Y Capacitors Connected in Parallel